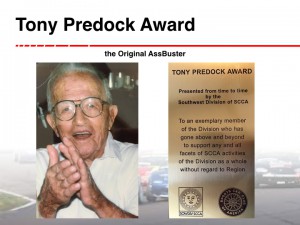 First, a little about the Award — Tony Predock was a long time member of the Southwest Division who was active in every area of the SCCA. He was a long time Steward and had been a Course Marshall and Chief of Flagging and Communications. Tony has helped at the Solo II Nationals when held in Texas, worked Rallies and was the First Assbuster of the Year for the Texas Region.

The Tony Predock Award is being presented by his family and R. David Jones, past Chairman of the SCCA Board of Directors and a long time friend of Tony’s.

The Tony Predock Award is to be presented to the SCCA member of the Southwest Division who has exhibited behavior above and beyond normal participation for the success of the Division in the past year.

This applies to all areas of the sport including, Race, Rally, Solo, Administration, etc.
Second, the nomination letter –
The individual who nominated Sasha Lanz wrote, “Sasha has been our Divisional Road Rally Steward since I can’t remember when. If I’m not mistaken, he also served a term on the National Road Rally Board and has been instrumental in helping many Regions in our Division and around the country develop their own Road Rally programs.

He’s developed one heck of a Road Rally program in Texas Region and is always available to lend advice to any Region interested in starting or revitalizing its own Road Rally Program.

He made a special trip from Dallas to Shreveport a few years ago to teach me and several other Red River Region members how to become Road Rally Safety Stewards. He is, by far, the staunchest supporter we have for Road Rally in the SOWDIV and I think he’s totally deserving of this award.” 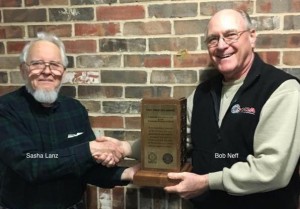 And last, from the recipient — At last night’s Texas Region banquet, I was awarded the Tony Predock award, one of the top Region awards, and one that is not always given. I thought it was a Club Racing trophy, because it was named after a hard working race worker, and always seems to be won by someone involved in our racing program. It has a nickname, and that may be a clue: the “Assbuster” Award, going to someone who puts out a lot of effort that benefits the Region and the club. In our speed-centric club, having someone in the Rally program win means that we are recognized as an important part of the Region and SCCA.

That doesn’t always seem to be recognized. So the effort that all of you put in to the rally program, especially in the last two years, is a big part of my getting a big trophy to display for a year. If our Rally program hadn’t been so successful, I don’t think that this would have happened. So I thank all of you (especially Betty) for helping make this happen. Now if I can just figure a way to turn this news into more entries for Sunday’s event….Sasha

From RReNews – In the true fashion of the late Paul Harvey, Texas Region RE Bob Neff wrote, “I presented the award during the banquet but didn’t realize that Sasha was leaving early to attend to family matters, so unfortunately by the time this award was announced he had already left.”

By the time you read this…Sasha will have already been re-presented this Divisional honor tonight, on February 8th! Thanks to RE Bob Neff for sending the photo (and to timezones that allow me getting it out to all of you) the same day!

Ever the salesman, did you catch the last line of Sasha’s comments?